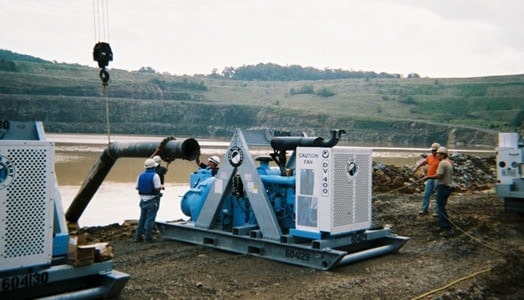 6 Billion Gallons Removed from Flooded Mine

A low pressure weather system over the southeastern Appalachian Mountains brought heavy, intense rains that caused a creek to break through a berm and flood a quarry that provided aggregates essential to the construction industry. An estimated six billion gallons of water shut down the quarry’s crusher and conveyor.

With the devastation from the flooding in the surrounding communities, the company needed to dewater and get production back on line to meet the increased demand. Rain for Rent was contacted to dewater the quarry.

After a site survey, it was determined that an initial 100-feet of dewatering was most critical to getting the crusher back up and running. Once the plant was back in production, the remaining 300-feet of water could be pumped out of the pit at a slower, more cost-effective pace.

A system consisting of three DV400c 16-inch pumps, 18-inch HDPE suction stingers and discharge piping allowed for the periodic repositioning of the pumps was mobilized.

Technicians fused pipe on site and assisted the quarry personnel in positioning the pumps, a difficult task since the breach in the berm had to be repaired prior to staging the pumps. Even with the massive equipment for moving rock into the berm hole, the task took several days.

Pumping at a rate of nearly 40,000 GPM, the water level in the pit began to subside. The pumps were routinely repositioned deeper into the quarry as the water level dropped to limit the suction lift to no more than 18-feet.

Strong teamwork between the aggregate company and Rain for Rent resulted in a successful, timely solution, saving the quarry money and preventing permanent damage to the flooded crusher and conveyer equipment. 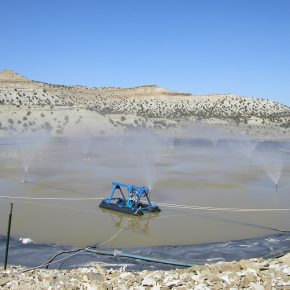 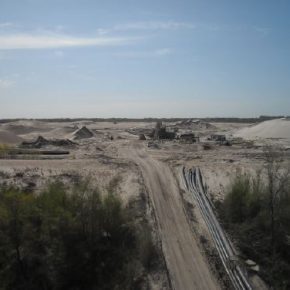