A large semiconductor manufacturer in the Southwestern U.S. began to outgrow the surrounding sewage and water infrastructure as production increased. Over the course of the last three years they have needed several stopgap measures to allow continued production.

Rain for Rent provided a fresh water supply pumping system of 2,000 GPM at 70 PSI through a 12-inch HDPE line from an alternate water source more than 1.5 miles away. This saved them millions of dollars a day with continued production and equipment protection from uranium-laden water.

A year and a half later, planned expansion of the plant would overwhelm the city’s existing sewer infrastructure.

Rain for Rent designed a system to bypass up to 6,000 GPM of sewage around blocked lines and take the waste directly to the treatment plant more than a mile away.

With the expansion, produced water from pipeline testing was filtered with five Rain for Rent designed filtration systems that could handle up to 5,000 GPM each.

For years now, this manufacturer has counted on Rain for Rent to help it grow and adapt to the infrastructure without lost production time. With these solutions, the manufacturer did not have to wait for infrastructure modernization to grow. The pumping projects will gradually be phased out over the coming months. 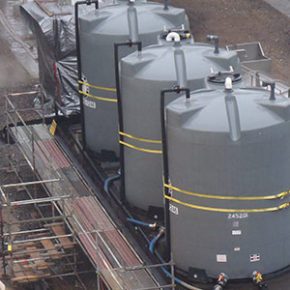 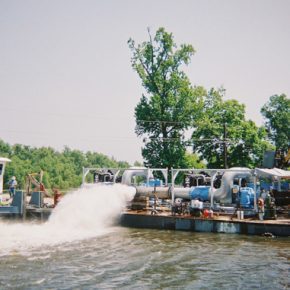